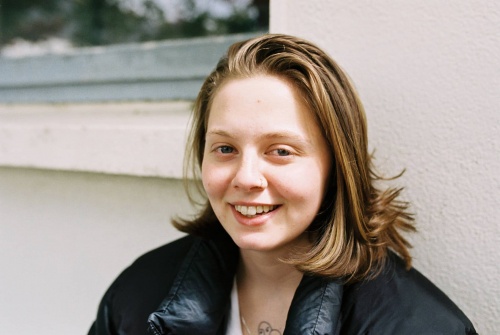 Bronwyn Andrews is a photography graduate from IADT, Dublin. Her latest body of work Sile na Gig, You Exhibitionist centers around the ancient iconography of the Sile na Gig, and intertwines self portraiture of the modern Irish woman with pre-catholic Irish culture. This series has been shortlisted for the Inspirational Art awards Andrew longlisted for the RDS Visual Artist awards in 2019.
In 2016 her piece REPEAL was included in a group show called Someone You Love in the Copper House gallery, which raised funds for the Abortion Support Network, an organization working towards reproductive rights for women in Ireland.
In 2017 she took part in a group show titled SCOPE, with a series focusing on a recycling plant in Kildare, asking questions about our responsibility to our environment. In 2018 Bronwyn’s work Does Anybody Else Have to go Bathrooms? Was in a gourd show in The Complex, Dublin, and was a collection of images examining female friendships and relationships within the club scene in Dublin.
Her practice is grounded in portraiture and the female form, and largely explores themes of the female experience in Ireland. She is interested in how Ireland’s history effects modern women.